Posted by hometheater365 in Review, Television on February 29, 2020

The Z9G rounds out its feature set with IMAX Enhanced Certification, Sony’s Propriety Motion Flow XR and Dynamic Range PRO. The Android operating system gives the Z9G a range of smarts, including Google Cast, voice recognition and a host of apps such as Netflix and YouTube. On the connectivity front, there are four HDMI inputs, three USB inputs, an Ethernet connection, as well as Wi-Fi and Bluetooth connectivity.

Sony claims that its MASTER Series has been created to convey the creator’s intent on-screen faithfully. To this end, the Z9G has a suite of calibration controls and the ability to interface directly via a network to Calman software for Direct Display Control (DDC). There’s also a dedicated Netflix Calibrated Mode, claimed to reproduce the picture quality of the studio master.”

I also wanted to listen to some music through the Ultra-3, imagining that many users will want to play audio selections in their multi-use media room and not just watch movies. To that end, I started with a few live performances of my favorite bassoon concertos. This is where I could really hear the Ultra-3’s soundstage and ability to project the venue’s space and dimension. Since the concerts were played by me, I had a strong sense of how they sounded live versus recorded. RBH has really created an accurate and neutral speaker here. Detail is superb with clear separations between instruments and textures. Even lower quality recordings avoided descending into mush.”

Posted by hometheater365 in Review, Television on February 28, 2020

But, while the TV’s front-end is colourful and intuitive, the menus are a bit of a  labyrinth. There are separate picture presets for standard dynamic range content, HDR and Dolby Vision, and the individual settings available in each shifts in a way that’s not replicated on TVs from any rival.

Serious tweaking is a tricky affair, but you can avoid much confusion by sticking with the standard preset, switching Energy Saving and all noise reduction settings off, changing Aspect Ratio to Original, and adding a few points to Sharpness. You should also experiment with the motion processing, as the default Clear setting results in overly processed and artificial movement.”

Posted by hometheater365 in Home Theater System on February 28, 2020

Tasked with delivering a high-spec, immersive audio system in a basement space with 2.3m ceiling, Pyramid AV began with CAD pre-visualization. Positions for the full 9.3.6 system were plotted (including an extra pair of surrounds to spread the image to the second seating row). In the finished room, all speakers are hidden from view 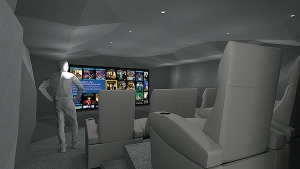 Posted by hometheater365 in Projectors, Review on February 26, 2020

“The EH-TW7100 adapts well to the very different demands of HDR and SDR, and impresses with 3D. The natural dimming effect of active glasses (not supplied) aids subjective black level, while the stereoscopic image remains bright and flicker-free enough to hold your attention. The sense of depth produced is exemplary, and motion is crisp and avoids any ‘shimmering’ effects. Best of all, crosstalk ghosting noise is very rare, either in the distance of large-scale shots (such as those across Pacific Rim’s vast Shatterdome), or over very near content such as subtitles or objects pushed ‘out of the screen’. Note that Epson’s pixel-shifting technology doesn’t work with 3D, so you only get a native HD image.

The EH-TW7100 finishes on a high with its audio. The built-in speaker system provides plenty of volume and the necessary range to stop Pacific Rim’s loudest mech vs monster battles from sounding harsh. The soundstage escapes from the projector’s bodywork, too, helping it appear at least a bit less dislocated from the distant pictures it’s supposed to be accompanying.”

“It would be an understatement to say that Samsung’s AV strategy for 2020 is multi-pronged. It’s not only improving on its excellent 2019 QLED line-up, but also advancing its 8K QLED TVs while making them more wallet-friendly, and building on its lifestyle TV range. The company’s MicroLED displays are becoming more accessible this year – even if only ever so slightly – and Samsung’s TV and soundbar experience are being uniquely harmonised.”

Home Theater 365
Create a free website or blog at WordPress.com.