The first thought that springs to mind when listening to AE300 Series system is that Acoustic Energy has sensibly concentrated on getting the fundamentals correct. The company has used identical drivers in all the speakers, and this results in an impressive tonal balance. The only time this isn’t true is with pans across the front of the room, where the horizontal centre speaker does sound slightly different, but this isn’t a major issue.

Acoustic Energy has also tried to ensure these speakers are sensitive enough to not present a problem for all but the most under-powered of AV receivers. The frequency response also looks good on paper, although those numbers at the lower end appear rather optimistic. However, bass shouldn’t prove an issue, because the system as a whole has the subwoofer to lay a foundation of bass.”

Posted by hometheater365 in Home Theater Audio System on October 8, 2019

The effective integration of the SPL-120 subwoofer finds these explosions hitting with plenty of delicious low-end impact, but there’s also a percussive thump to the large calibre machine gun-fire. The scene where the Little Bird helicopters strafe the buildings with a mini-gun was particularly brutal.

In fact, the Klipsch system loved everything about this soundmix, creating a convincingly, consistently immersive soundstage. Helicopters fly slickly through the room, shell casings tinkle to the ground, and the score is delivered with a pleasing musicality. The experience was visceral and thrilling. Which is what home cinema is all about. 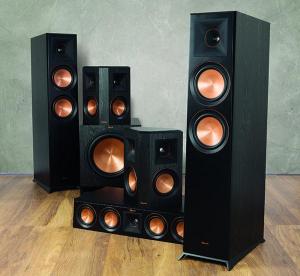 The first fruit of the reborn RSL was the CG4 system reviewed in the September 2011 issue of Sound & Vision, followed by the smaller and very affordable CG3 system, which was reviewed in March 2017. Now RSL has returned with the CG5 system, a more ambitious, but still affordable, replacement for the CG4.

The CG5 series consists of just two models. There’s the CG5 ($400 each) itself, a stout two-way bookshelf with a 5.25-inch aramid fiber cone woofer and 1-inch silk dome tweeter, and the CG25 ($500 each), a model with a slighter longer cabinet to accommodate a second 5.25-inch woofer. The CG25’s design allows for it to be used either in a vertical orientation in a normal stereo setup or flipped on its side to serve as a low-profile center speaker 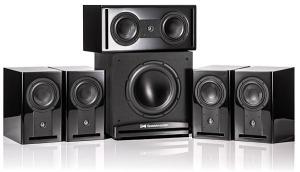 I was struck by the solid build quality of the CG5 series speakers, which have a flawless finish that any piano maker would be proud of. Subjecting the dense, well-braced cabinets to a knuckle-rap test yielded a dull thunk (a good thing), along with some sore knuckles.

The speakers’ solid build is likely due to what RSL calls its Compression Guide Technology, a fancy term for a pair of wall-to-wall internal baffles meant to reduce cabinet resonances by breaking up the air volume inside the box. Along with impacting air patterns, the baffles provide the added benefit of stiffening the cabinet’s side walls.

“The Klipsch Reference Premiere RP-500A is an upward-firing module that is designed to create the illusion of overhead channels by bouncing sounds off the ceiling. It utilises the same 5.25-inch spun copper Cerametallic midbass driver and 1-inch titanium LTS vented hybrid Tractrix horn-loaded tweeter as the rest of the line-up, but also includes Dolby’s proprietary technology (although it also works with DTS:X soundtracks).

The RP-500A is more versatile than your average Atmos/DTS:X module, with the option of a surround, height or upward-firing orientation. Depending on your speaker configuration, you simply flip the switch on the rear between Atmos or surround. There’s a keyhole for wall mounting, and the binding posts are housed in a recessed area for tidier cabling when placed on top of another speaker.” 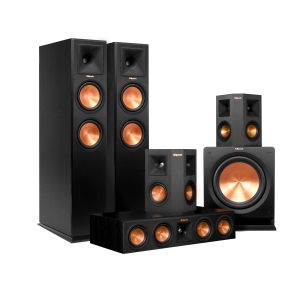 Calling on the speaker’s subtler side with Paddington (Blu-ray) didn’t disappoint. The creature’s capers and the charismatic dialogue of the cast shone through the soundstage. From the ambience of the jungles of Peru to the bustling London streets, the 300IWLCR6s created an enviably believable atmosphere, even in stereo.

I can’t fault the 300IWLCR6’s ease of installation and its performance is top-notch. The open-backed design may mean some fine-tuning of EQ to get a reasonably flat response depending on your walls, but the underlying engineering, engaging sound and articulate dialogue handling make them a standout design in a crowded market.